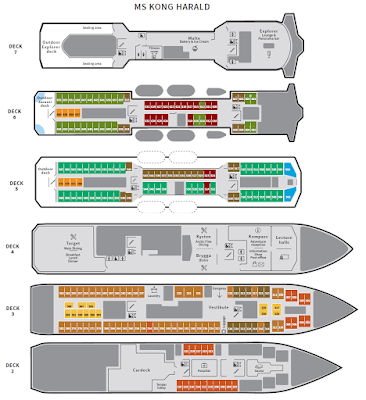 Hurtigruten is operating 11 ships along the Norwegian west coast from Bergen to Kirkenes.

Hurtigruten ships function as working ships and are calling 35 ports around the clock during the voyage from Bergen to Kirkenes.
Many of the 35 ports of call are not more than tranquil hamlets at tiny islands and the duration of the stops are not more that 15 to 30 minutes.
Longer stops (three to four hours) in Bergen, Tronheim, Bodø, Tromsø, Honningsvåg and Kirkenes. Here it is possible to visit the city or time for a longer excursion.

Many does take the entire 11 nights trip, however personally i think it's too much of the same - hence I only did 3 nights to experience the 'Midnight Sun' from Bodø to Kirkenes.
I have previously done a Norwegian Fjords Cruise covering the southern part of the Norwegian West coast. 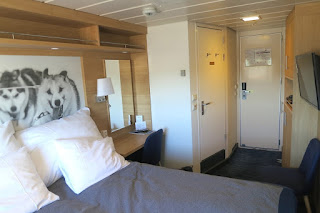 We had booked an outside Arctic Superior Cabin and got an aft cabin at port side.
There were some noise and vibration when docking and sometimes when loading of goods (depend on the location of the cabin).

Several of the excursions offered by Hurtigruten does start in one port and are finishing in another. Note that excursion offerings are different north and south bound and varies during the year.
I did two excursions. One at Lofoten from Stamsund to Svolvær and another at Honningsvåg - see the separate review - Highlights of Lofoten and Bird safari.

The Hurtigruten ships are considered expedition ships rather than cruise ships. No entertainment which often is part of conventional cruise ships offerings, however we did get The voyages was accompanied by lecturers by the expedition team as well as films (will be described later).

Dress code and clothing: There is no formal dress code onboard. At Summer make sure to bring a windproof jacket – preferably with a hood, eventually a woolen hat and mittens for views from the deck. It can be rather cold in the evening and night. Good walking shoes for some of the optional land excursions

There was an internet café on board and the wifi package included in the 'Select package' and connectivity was pretty good - I did also use Wi-Fi for FaceTime without problems. Wi-Fi connection in all public areas as well as un the cabin. Connection was intermittent few times. 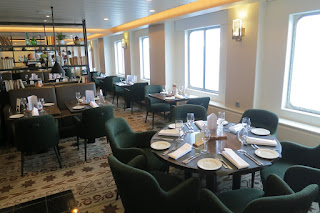 After embarkation we were requested to go to the 'Torget' main restaurant to make the table reservation for our voyage. Each Hurtigruten ship has a slightly different practice with regard to meal times.
The usual meal times are:
Breakfast from 07:30 to 10:00 hours (open seating).
Lunch from 12:00 to 13:00 hours (open seating).
Dinner from 18:30 hours (set seating).
During the high season, there are several seating's for dinner with a 30 minutes interval. The seating will normally be allocated on the first evening but we did change time during the cruise.
Our full board did start with a buffet lunch and ended with a breakfast on the arrival in Kirkenes. The food on board is high quality local Norwegian food. Breakfast is buffet style with a selection of cold meats, cheese, eggs, bacon and  cereals, fruit and bread. Lunch is Norwegian buffet with a selection of marinated herring, smoked artic fish, cold meats, salads, some hot dishes, as well as desserts and fruit. Dinner is a three course set meal.  One night a buffet dinner was served. 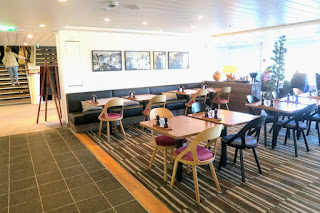 Ships are fully licensed and wine, beer and drinks are served in different bars. Prices are the same as in Norway and considered expensive compared to other countries.

Shore Excursions are normally pre-booked - I had booked two excursions. See separate review. Remaining places are sold on board.

M/S Kong Harald is fully stabilized as most of the other ships. Most of out tour was in narrow waters between mainland Norway and the coastal islands, but we did enter the open sea once. The weather was good and the sea calm, but the sea can be rather rough.


Gratuities are included in the cruise fare. You can tip specific crewmembers at your discretion, but tipping is not expected.
The currency for On board expenses is the Norwegian Kroner (NOK). Foreign currency can be changed into NOK at the reception. Purchases onboard can be made either with cash or by setting up an onboard expense account with a credit card.